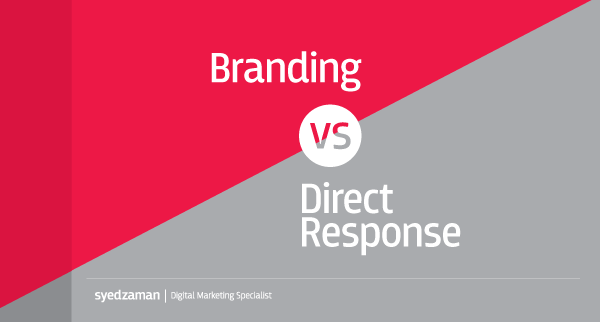 With the expansion of Internet and online trade, it has become harder for businesses to figure out the level of emphasis they should place on branding and direct response.

Direct response advertising and branding have separate styles of promotion. Branding, is an elongated tactic designed to enhance the brand image and worth of the business and its merchandise. Direct Response marketing, on the other hand, comprises of messages aimed at generating an instant reaction from the customer.

Branding, or delayed response messages, require more extensive planning. The goal is to develop and emphasize the key messages of the business and its merchandise brands. Superior quality, top-notch service, bang-for-the-buck, resilience, durability, economical and kind to the environment are several of the characteristics companies attempt to link to their brands using branded advertising. Coherent, innovative messages that highlight the same qualities in the long run let businesses grow brand status, which boosts the worth of merchandises under the brand.

Brand advertisers are generally most involved with confirming that their message has gone through to their potential customers, while retaining hold of the places their brand is displayed, and the cost of each impact of the commercials.

Branding lets the business determine its rank in the industry for the long-run. It obtains competitive attention from customers by communicating to them the things which make the business and its merchandise distinctive, diverse or superior in comparison to others. Attaining influential branding requires steadiness, constancy, investment and fulfillment of the assurances the brand advertises. Competitors pursue rivals’ market shares as soon as rivals halt investment in brand enhancement/upkeep. Thus, long-term branding has to be emphasized on to prosper in the long-term.

Direct response messages comprise of calls to action that bring about instant customer action. Direct response can happen via an assortment of platforms. Television or print ads could lure customers in using the instructive “call now” or “be among the initial 100 callers.” “Limited time” is a phrase regularly used to signify the temporality of a specific sales promotion. Coupons, sales discounts, new customer promotions are further instances of direct response tactics.

Direct response marketers are usually aiming to generate a high volume of conversions at the cheapest cost, and thus aren’t very focused on promoting brands. Examples of conversions include sign ups, leads, consumption or other actions a marketer aims for the audience to take.

The chief resolution of direct response is to drive business instantly. Its objectives in the near future significantly differentiates direct response from branding. Businesses utilize it to produce new business, appeal to prospective customers, generate revenue, get rid of leftover inventory or generate traffic towards the company. A difficulty of exploiting direct response marketing is the possibility of developing a price orientation with customers. This clashes with the work of long-term branding to place more importance on worth, superiority, service or other elements.

Difference Between Branding and Direct Response

Despite benefits of both branding and direct response campaigns, it’s a fact that, at times, one sort among the two is a better tool to attain a company’s objectives comparatively. The key to selecting the appropriate kind of promotion is perceiving the merits and drawbacks of each, in an unprejudiced manner. Listed below are a number of the key variances among branding and direct response marketing:

Owning a durable brand will be of higher significance as an increasing number of products are commoditized. Difficulties arise when branding-based marketing is the sole kind of marketing the business does. It should be popular for something, and consumers should be attracted towards the brand instead of the company going after customers. The dilemma though, being popular in itself is not enough to generate cash. Sales have to be taking place somewhere, instead of just attention and likes and positive comments on social media. The business will generate money only when someone decides to buy whatever it is selling desperately enough to pay cash for it.

The two forms of marketing are mutually beneficial when employed together. Branding grows gradually, with outcomes showing after a while. In its place, customers should be targeted with time, contacted using phone, email and social media and the relationship should be cultivated. The objective is to develop brand’s reputation so that the customer believes in it. Afterwards, sales will happen, earnings rising with each sale.

Conversely, as branding is gradual, direct response campaigns work well to drive sales in a briefer term. Call to actions including “call now” or stop in today” to reward buyers with a discount, free product or limited inventory could be utilized. These campaigns bring about an instant reaction which allows outcomes to be viewed straightaway, then again, customers might not possess any sentiment for the brand.

Corporations like McDonald’s, Coca-Cola, and Geico use a different balance between branding and direct response marketing, investing heavily on the former. They work on embedding the brand’s image in the customer’s head so as to make the customer think of their specific brand whenever the customer thinks of a product they sell. McDonald’s communicates that they sell food everyone loves. Coca-Cola communicates that the customer will feel happier when drinking a Coke. Geico communicates that if given a swift call, money can be saved on car insurance. They do this to be remembered by consumers in the present day’s busy world. However, the same thing doesn’t apply to a lawyer specializing in car accidents, or a software company providing software to landscapers since there isn’t a very long sales sequence in such trades. Professions like these require the revenue on the first go, before or without advertising.

Conventionally, in order to increase the awareness of a brand across an area, branded marketing is used. While direct response marketing demands call from the audience right then and there, click someplace or carry out some other action right away, brand advertising only requests the potential customer to watch the message repeatedly. By watching the message repeatedly, multiple times, marketers expect that they will be reminded of the brand when customers shop for that type of product.

This type of advertising is productive without a doubt but it tends to be expensive and time-consuming. Also, there is no perfect way to measure the success of any particular branding campaign. On the other hand, direct response campaigns require an instant response and so their effectiveness is evident right away. Brand Response marketing merges the two of them and allows an advertiser to convey strong branding messages as well as a call to action that can help produce actionable data.

The brand response is not completely an occurrence of the 2000s. There were noteworthy portents in the 1990s, two the best case being Direct Line and the well-known red telephone. At that time, it was considered a sector-specific success than a broader breakthrough in advances to marketing communications. The development of Brand Responses has been stimulated by numerous factors. Since the middle of the 1990s, the growth of the internet created hindrance for business models of existing sectors and produced new business sectors like aggregators. To represent and determine consumer ‘response’ has increased noticeably and is continuing quickly. The commercial worth of this ‘response’ remains a matter of continuous debate. Now, the majority of the businesses function in a persistently short-term environment. Daily, weekly, and monthly targets have become the standard. The quarterly report has become a long-term perception for many. Marketers cannot merely afford to split the Brand and Response as they used to because of the downward pressure on past decade marketing budgets.

Consumers have now become more ‘responsive’ than ever. For them, it is easier to connect with relevant marketing campaigns and they are eager to respond to the right offer. Social networks have given opportunities for responding where individuals can comment to participate without the formal invitation from brands.

Over the past ten years, the industry of marketing communications has constantly promoted the value and merits of joined-up or integrated view and execution. Keeping aside well-documented interdisciplinary turf wars, this has formed an environment where Brand Response is expected to thrive.

With a First Class Honours Degree from Newcastle University, and a First Class Master’s Degree from the prestigious Imperial College London in the UK, Tahmid specializes in digital marketing, yet possesses an exceptional amount of knowledge and experience in business management. As a Lecturer of Digital Marketing, Tahmid has focused all his attention into helping ambitious students to build a solid career in the field of Digital Marketing. At TRI Digital, he is responsible for planning, developing, implementing and managing the overall digital marketing strategy of our clients.